How Merlin became central to the Arthurian mythology 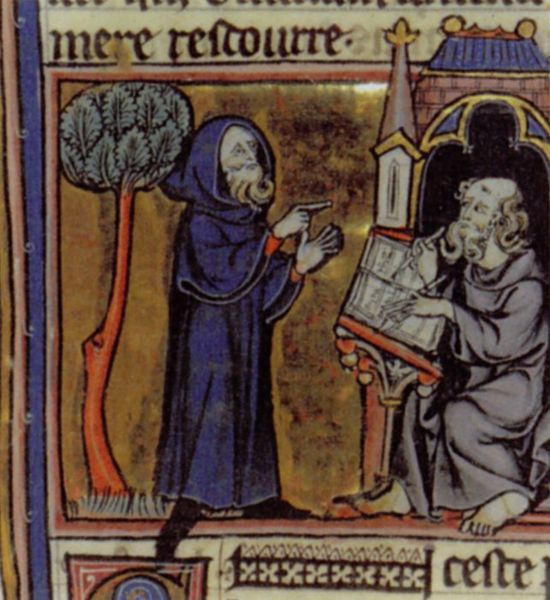 An image of Merlin from a 13th Century manuscript
The Historia Regum Britanniae (English: The History of the Kings of Britain) begins with the founding of Britain by Brutus, great grandson of the Trojan Anaeas. It includes early British stories which have provided inspiration for other writers over the years, including Shakespeare, who used the story of King Leir who divided his kingdom according to which of his three daughters loved him the most, as the basis for his own King Lear.

The line of British kings continues through the Roman invasion and includes the first Christian king, Lucius, before eventually ending up with Vortigern. It is at this point that Merlin is introduced by Monmouth.

Vortigern has usurped the throne of Constans II and is trying to build a castle at Dinas Emyrs in Gwynedd from which to defend against the Saxons Hengist and Horsa.
​However, every time he builds a tower, it collapses.

​Vortigern is told by his advisors to find a boy born from a virgin mother and to sacrifice him, scattering his blood onto the foundations.

Merlin, who in this version is fatherless, being the son of a minor Princess of Dfydd and an angel or incubus, is brought to Vortigern and scornfully rejects the advice of the soothsayers, informing the warlord that there is a pool hidden deep beneath the foundations in which two dragons are battling, a red one signifying Vortigern and a white one which represents the invading Saxons.

​Merlin tells Vortigern that although the white dragon of the Saxons is winning at the moment, it will soon be defeated by the red dragon of the Britons. Interestingly, historical excavations at the site of the hill fort at Dinas Emrys have produced the remains of a tower which dates to the correct time for both Vortigern and Ambrosius Aurelianus.

Merlin comes to prominence under the rule of Uther Pendragon. The high king has fallen for the Lady Igraine, wife of Gorlois, Duke of Cornwall and has tried to seduce her. Unfortunately for Uther, Igraine is a loyal wife and tells her husband, who leaves the court without permission for his castle of Dimilioc near St Dennis while dispatching Igraine to the stronghold at Tintagel. Uther declares Cornwall a traitor and immediately besieges Dimilioc.

In the meantime, Uther has Merlin use his magic to disguise him as Gorlois so he can enter Tintagel, while the battle is raging at Dimilioc, and father Arthur upon the unknowing Igrainne. There is some dispute as to whether Gorlois was slain before Igraine conceived Arthur, in which case her subsequent marriage to Uther would have legitimised him, or afterwards, in which case Arthur remains illegitimate.

There is further confusion about the number of children Igraine produced, either with Gorlois or with Uther. Some legends also have her married an earlier third time to Hoel of Brittany, by whom she has had daughters usually named as Anna (Morgause), Elaine and Morgan as well as a further son called Cador, who is Duke of Cornwall after Gorlois. However, whichever version of the stories is followed, Arthur is the son of Uther and Igraine and is conceived via the magic of Merlin.

Arthur is still a youngster when Uther dies, his age has been noted as 15 by Monmouth. In most of the histories he has been hidden away by Merlin at Uther's behest in the halls of Ector, father of Kay or Kai, somewhere identified as Forest Sauvage (the modern day location of which is not established however Caer Gal, above the River Dee, west of Bala, has been identified as a possible location).

It is in Robert du Boron's epic poem Merlin that Arthur is first introduced to the legendary magician. Unfortunately only a few lines of the poem remain but in this French tale Merlin is a shapeshifter and prophet. This version is carried over into the Merlin who creates the mythology of the sword in the stone to demonstrate that Arthur is Uther's heir and rightful king which appears in Le livre d'Artus and Suite du Merlin.

Arthur grows up as Kay's foster brother and squire and receives a basic education in both fighting and in matters of chivalry. Merlin arranges for the tournament in London at which Sir Kay forgets his sword and Arthur is despatched to fetch it from the inn at which they are staying. Unable to get into the inn as it is closed, he stumbles upon an old sword thrust into an anvil and resting on top of a stone within a church graveyard. Arthur grabs this sword and rushes off back to Sir Kay.

Once the discovery of where the sword has come from is revealed, Merlin has it placed back in the anvil and then all of Uther's former knights try to draw it out once more. Only Arthur is able to and Merlin pronounces that this is because he is the true born heir of Uther Pendragon and King of Camelot.
​
He also arranges for the Round Table to be made and develops his role as Arthur's wise advisor. It is this Merlin who is ultimately trapped in the Forest of Broceliande by Viviane. Sir Thomas Malory used the three French texts to create his version of Merlin and it is this one which has become generally held up as the definitive. 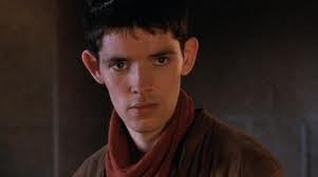 Colin Morgan as Merlin in the BBC TV series
Merlin is often associated with the druids of ancient Britain. One of the oldest sources for the name Merlin is in the ninth-century Armes Prydein (Prophesy of Britain), in which the phrase "Merlin foretells" appears with regularity.

Prophesy was central to the Celtic religion and the role of a seer or prophet was an important one for their spiritual well-being.
Among the "ranks" of the druids were the Ovates, from the Latin vates (seer), and it was their task to seek answers in divination and prophesy which would provide guidance for the Celts.

After the Roman suppression of the druids, which included the massacre at Mona (Anglesey) in 64AD, Christianity continued to spread throughout Britain and the druidic role of prophet essentially vanished, although pockets of resistance maintained the old ways on the edges of the newly created Saxon and Angle kingdoms which were established once the Romans withdrew from Britain in the 400s.

Prophesies attributed to Merlin are usually related to the future of his people and include names from history including figures such as Cadwaladr, who ruled over an area of Wales in the seventh century, or Owain Gwynedd, who fought the Normans in the 1100s.

The idea of Merlin as a magician or sorcerer come to the mythologies mainly from Medieval Literature. This was a time when the first flurries of science were getting off the ground and explorers were venturing to the furthest corners of the known world and beyond. Early examples of Merlin's sorcery in literature include the belief that he was responsible for the creation of Stonehenge. Geoffrey of Monmouth has him moving the stones from an earlier Irish monument called the Giant's Dance.
After Uther and Aurelius (here relegated back to his role as a son of Constantine) fail to move the stones with hundreds of Britons, Wace (in his translation of Monmouth's work) writes the following:

Merlin . . . walked warily around the stones. His lips moved without stay, as those of a man about his orisons (prayers), though I cannot tell whether or no he prayed. At length Merlin beckoned to the Britons. "Enter Boldly!" cried he, "there is naught to harm. Now you may lift these pebbles from their seat and bare and charge them on your ships." So at his word and bidding they wrought as Merlin showed them.

The stones are floated across the sea and set up on the Plains of Amesbury. However, descriptions of the stones reveal them to be those at Stonehenge (which Monmouth often mixes up with Amesbury and Avebury). The route he has the stones take, from Ireland across the sea and then to their final resting place is remarkably similar to that of the bluestones of Stonehenge themselves, which were quarried in the Prescelly Mountains in Wales and then transported east to Salisbury Plain.

​Geoffrey Ashe, a contemporary expert on Merlin, has theorised that this could be Monmouth referencing a much earlier druidic legend of how the stones were transported to Wiltshire by a "god-like" builder who becomes associated with Merlin in later years.

Some of Merlin's Prophesies

Merlin saith that in England shall be seen strange things, as preaching of traitors, great rain and wind, great hunger among the common people, great oppression of blood, great imprisonment of many men and great battle; so that there shall be few or no quiet place to abide in;
the Prince shall forsake men of the church, Lords shall forsake righteousness, counsel of the aged shall not be set by; religious men and women shall be thrust out of their houses; the common people for fear shall not know which way to turn; parents shall be hated by their children, men of worship shall have no reverence of others; adultery shall abound among all; with more ill than I can tell of, from which God us defend.

Sunday Prophecies of Merlin, Becket, and Others, Author Unknown, published in London in 1652

"Luxury shall overspread the land, and fornication shall not cease to debauch mankind. Famine shall then return, and the inhabitants shall grieve for the destruction of their cities. In those days the oaks of the forests shall burn, and acorns grow upon lime trees! The Severn sea shall discharge itself through seven mouths, and the river Usk burn for seven months! Fishes shall die in the heat thereof, and from them serpents will be born."

​"The baths of Badon [hot springs of Bath] shall grow cold, and their salubrious waters engender death! London shall mourn for the death of twenty thousand, and the river Thames shall be turned to blood! The monks in the cowls shall be forced to marry, and their cry shall be heard upon the mountains of the Alps."
"The seas shall rise up in the twinkling of an eye, and the dust of the ancients shall be restored."

From The Prophecies of Merlin by Geoffrey of Monmouth