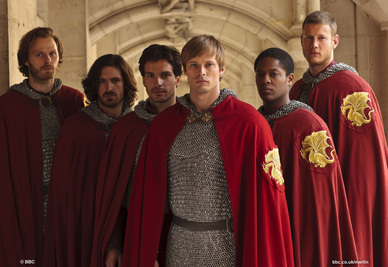 Arthur and his loyal knights from the BBC TV show Merlin
Generally speaking, the Matter of Britain is the name given to all the literature which exists and which referrers to the legends and historical facts surrounding the history of Great Britain and its rulers, specifically relating to King Arthur. Derived from classical mythology, it is one of the three literary cycles referenced repeatedly  along with the Matter of France (tales of Charlemagne) and the Matter of Rome (Greek and Roman Mythology) during the period of medieval literature which encompasses the collapse of the Roman Empire (500AD) to the Renaissance in the15th century.

Of all the literature, that relating to King Arthur is the most extensive and covers a wide variety of sources dating from early Welsh mythology in the 400s through to the later works of authors including Sir Thomas Malory in the 15th century.
The two main stories regarding King Arthur relate either to Camelot, the glorious but ultimately doomed court he presides over, or the appearance of and subsequent search for the Holy Grail. Most later medieval literature surrounding the mythologies of King Arthur are firmly rooted in Christian traditions and themes and move away from the earlier Romano-Briton and Celtic/Welsh narratives which place Arthur firmly at the heart of a pagan world.
The largest body of work included in the Matter of Britain dates from the 12th century. Authors such as Geoffrey of Monmouth, Béroul, Chrétien de Troyes, Robert de Boron, Wace and Wolfram von Eschenbach laid down the foundations which Sir Thomas Malory later adapted into his celebrated Le Morte D'Arthur, widely used now as the "definitive" work on King Arthur, Camelot and the Knights of the Round Table, even if someone inaccurately.

The Matter of Britain also includes works which examine the legendary Kings and Founders of Britain, Brutus of Britain, Corineus, King Cole,  Kymbelinus (Shakespeare's Cymbeline), Leir of Britain (Shakespeare's King Lear), Cassibelanus, Caradocus, Aurelius Ambrosius, Uther Pendragon and Cadwallader, who is widely held to be the last of the Briton kings, dying in 682. The documents also examine people and objects associated closely with King Arthur, namely the Round Table, his wife Guinevere, his sword Excalibur, his father Uther Pendragon, his capital city Camelot, his heir and enemy Mordred and his final resting place at Avalon.
The following Knights of the Round Table also feature heavily in the literature: Lancelot, Galehaut, Galahad, Tristan, Gawain, Percival, Bors, Geraint, Gareth, Kay, Lamorak, Gaheris, Bedivere, Agravaine, Caradoc, Sagramore, Calogrenant, Ywain, Erec, Pelleas, Palamedes and Dinadan. It also includes the histories of Merlin, the Lady of the Lake, Morgan Le Fay and Sir Ector.