The Origins of Arthur 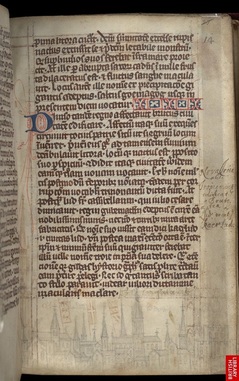 Narrative text: the battles of King Arthur from Historia Brittonum - France or England, first half of the 12th century.
The British Isles were home to a mix of different tribes until the Roman legions invaded in the first century. For 350 years, Romans ruled Britannia as a centralised state. When the Roman legions were disbanded, fourth- and fifth-century Britannia had minor tyrant kings. Angles, Jutes and Saxons were frequent invaders. Vortigern invited the Saxons to repel the invasions but was betrayed by Hengist and Horsa.

The Old Saxons populated the areas of the kingdoms of Essex, Sussex and Wessex. The Jutes populated the area of Kent, the Isle of Wight and an area of the adjacent mainland that would later be part of Wessex. The East Angles, Middle Angles, Mercians and all those north of Humber arrived from the region of Anglia (a peninsula in Southern Schleswig, Northern Germany).

There is much written testimony about the fifth century in Britain. Some of it is contemporary, but very little of it originates from there. Almost all of it, at least in some points, is contradictory. It seems that the farther in time the viewpoint moves away from the period, the more information becomes available, leaving the reader to wonder how reliable the sources are and what they are really based on.

When looking for the "historical" Arthur, researchers are essentially confined to just four pieces of evidence which may contain information of actual historical value: the Annales Cambrie, the Historia Brittonum, the collection of heroic death songs known as Y Gododdin and the four or five times the name Arthur occurs in sixth and seventh century literature.
Dr Caitlin R. Green, formerly at Exeter College, University of Oxford, now at the University of Cambridge, Institute of Continuing Education, has published a comprehensive examination of these historical sources in her The Historicity and Historicisation of Arthur, available from her website as a pdf.

Arthurian References in the Annales Cambriae (Annals of Wales) by: Anonymous (Author)

537. XCIII. Annus. Gueith Camlann, in qua Arthur et Medraut corruere; et mortalitas in Brittania et in Hibernia fuit (537. The Battle of Camlann in which Arthur and Medraut fell, and there was devestation in Britain and in Ireland).

The earliest references to Arthur – or the king the monk Gildas calls Ambrosius Aurelianus – is in de Excidio Brittonum, written around 547 and which describes “a most temperate man, who by chance was the only person of Roman parentage to have come through the catastrophe in which his parents, who had worn the royal purple toga, had been killed. … His men challenged their previous conquerors (Anglo Saxon) to battle, and by the grace of God, victory was theirs”.
Welshman Nennius writing around 800 in his The History of the Britons describes: “Then Arthur fought against these peoples (Anglo Saxon invaders) along with the kings of the Britons, and he was the leader in their battles”.