A Sword of Power

In Culhwch and Olwen Arthur is Culhwch's cousin. His retinue sail to Ireland aboard his ship Prydwen, (the ship also used in Preiddeu), to obtain the cauldron of a certain Diwrnach, who treats them to a feast but refuses to give up his prize. Arthur's warrior Llenlleawc the Irishman grabs Caledwch and swings it around, killing Diwrnach's entire retinue. This is one of 40 tasks that Culhwch must undertake to win the hand of Olwen, the daughter of the giant Yspaddaden, whom he has been cursed to marry by his wicked stepmother the Queen of Caledon. Part of the book also catalogues the possessions of King Arthur as including his mantle, his ship (later called Prytwen), his sword Caletvwlch, spear Rongomynynat, his shield Wyneb Gwrthucher, knife Carnwenhan and his wife Gwenhwyvar.

The Sword in the Stone 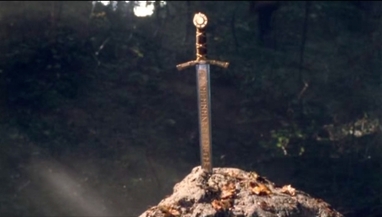 Excalibur as the Sword in the Stone from the BBC TV series Merlin
The earliest references to a sword in a stone come in Robert du Boron's Merlin. Following the death of Uther Pendragon, Merlin tells the nobles of the land to gather at Logres (which is the ancient name for the land of what is now England and is believed to refer to somewhere around London) at Christmas to see Christ's choosing of the new king by way of a sign.

As the Archbishop and priests are conducting a mass, a great square block of stone and an anvil appear and in the anvil is fixed a sword. On the sword was written "whoso shall lift this sword from the stone and the anvil the same is rightly born King of England" and all the lords agreed that whoever could remove the sword from the anvil would be their rightful ruler and heir to Uther Pendragon.
This sword is often believed to be the one belonging to Uther Pendragon which Merlin has magicked into the anvil after the king's death.
A great tournament was held on New Year's Day with jousting and other knightly pursuits but none of the nobles was able to remove the sword from the stone until Sir Entor (Ector) came with his eldest son Kay, who had been newly knighted, and his younger son Arthur, who was Kay's squire.  Kay left his sword behind at the inn and sent Arthur to go fetch it for him. When Arthur got there, the inn was locked and so, on his way back to tournament, he passed the church and saw the sword sticking out of the anvil and took it and returned to his brother.
When Kay sees the sword he asks where Arthur got it from and is told he took it from the stone outside the church. Entor sees Kay with the sword, asks him the same question and is then dismayed when he hears Kay reply that he took it from the anvil on the stone. He tells Kay he knows he is lying and that he has no right to the sword. Kay owns up and Entor returns the sword to Arthur and asks him to place it back in the anvil on the stone. He does so and Entor asks Kay to try and remove it, he is unable to do so but Arthur can. Entor owns up to being Arthur's foster father and they go to the Archbishop with the sword, where the tale is told once again.
After much procrastination from the barons and common people of the land, Arthur is eventually crowned and anointed king the following Pentecost after he has demonstrated that he will make a fair and just king. Merlin then appears and reveals the secret of his birth as the son of Uther Pendragon and his Queen Ygrane.

Interestingly, fifth-century scholars record that leadership disputes between rival British warriors were often resolved in single combat, the victor drawing a “sword of office” from a stone altar; a practice that may have given rise to the legend of the sword and the stone.

The Sword in the Lake 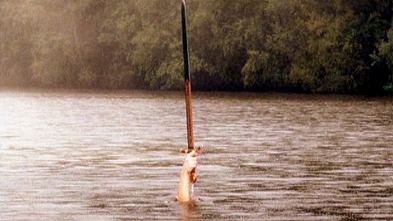 Freya, Lady of the Lake in the BBC TV series Merlin, produces Excalibur
By the time we reach the works of Chretien de Troyes' in the last decades of the 1100s, Excalibur has become an established addition to the Arthurian mythology. In his Perceval de Troyes writes that Gawain carries the sword and it was "the finest sword that there was, which sliced through iron as through wood" which is where it has come to gain the meaning Cut Steel, which is later inaccurately used by Sir Thomas Malory.

It is always the sword given to Arthur by the Lady of the Lake which is referred to as Excalibur in all but one of the legends which surround it. It only becomes associated with the sword in the stone in the Post-Vulgate Lancelot Grail written some time around 1210 to 1230.
In the later Post-Vulgate Suite du Merlin Arthur receives Excalibur from the Lady of the Lake after breaking his first sword, called Caliburn, in a fight with King Pellinore.
Arthur and Merlin visit the Lady of the Lake where they also see a hand rising out of the water holding a sword aloft. "This sword is Excalibur, that is as to say as Cut-steel" says the Lady of the Lake, it belongs to her but she promises it to Arthur providing he will return it to her at the end of his life. He agrees and he and Merlin row out to the centre of the lake where he receives the sword. In many of the legends, Excalibur is engraved with writing on each side. One side has "Take Me Up" on it and the other has "Cast Me Down". It is also said to shine whenever Arthur draws it from his scabbard and blind his enemies.

Not only is Excalibur enchanted to never break, it also comes with a scabbard. Merlin asked the king if he like the sword or the scabbard better. Arthur preferred the sword. Merlin told him his choice was bad, because as long as the king keep the scabbard, no weapon could harm him; meaning Arthur couldn't bleed to death. It is only when Morgan le Fey steals the scabbard (and in some legends gives it to her lover Accolon, in others she casts it into the lake and it is never found again) that Arthur is then mortally wounded by Mordred at the Battle of Camlann.

Excalibur is returned to the Lady following Arthur's mortal wound when the King tells Sir Bedivere to go and throw the sword into the lake. Bedivere says he will do so but, on two separate occasions, he fails to do so because he cannot bare to throw away such a magnificent weapon. Arthur knows he has failed because he twice asks him what he saw when he returned the sword to the lake. Both times Bedivere says he heard the wind on the lake, the sound of the birds calling and Arthur chides him. The third time Bedivere throws the sword into the lake and returns to Arthur to tell him:

"Sir King, I closed mine eyelids, lest the gems
Should blind my purpose, for I never saw,
Nor shall see, here or elsewhere, till I die,
Not though I live three lives of mortal men,
So great a miracle as yonder hilt.
Then with both hands I flung him, wheeling him;
But when I looked again, behold an arm,
Clothed in white samite, mystic, wonderful,
That caught him by the hilt, and brandished him
Three times, and drew him under in the mere."

Tennyson's The Idylls of the King