William of Malmesbury in his De Antiquitate Ecclesiae Glastonie (Enquiry into the Antiquity of the Church of Glastonbury), also maintains that Avalloc lived in Avalon with his daughters and the same name appears in Welsh poetry, where he is the father of the goddess Modron (also connected with the Morrígan), and in later Arthurian mythology under the name Evelake.

The Celts believed in the Otherworld and for them Avalon represented the land of the mythical and mystical. It existed outside of the normal world but was accessible from it. Time moved at a different pace and islands were specifically associated with being gateways into the Otherworld.

​Most of the islands of the coasts of Britain were known as Isles of the Dead to the early Celts. Lundy, the Isle of Man, the Scilly Isles, have all been associated with being the real life location for Avalon.

The Idylls of the King - Glastonbury as Avalon 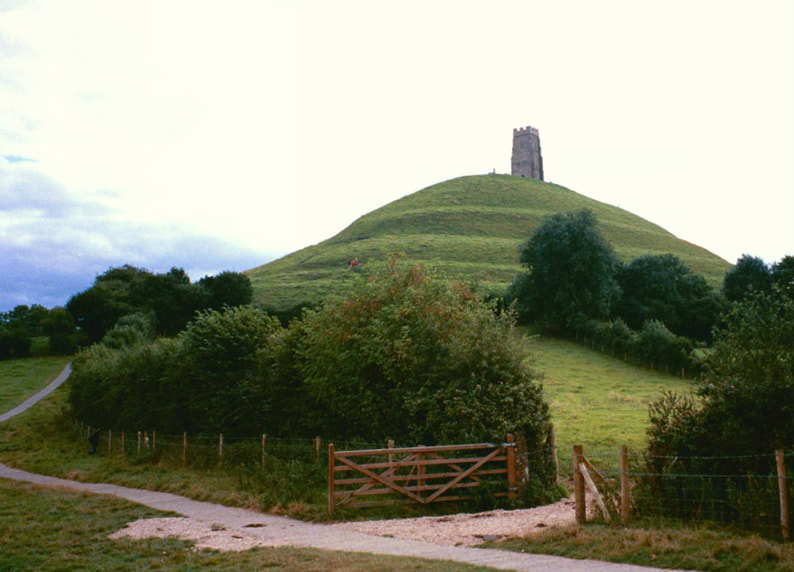 Glastobury Tor, showing the church on the summit and the processional way.
In the 12th century the island Tor at Glastonbury would have appeared rising out of the boggy marshes, with the only access a road which bisected Ponter's Ball Dyke, an ancient earthwork whose ends now disappear into farmland. To all intents and purposes, it would have been an island though it was nowhere near the sea. In Welsh Glastonbury's earliest name translates as Ineswitrin or Ynes Witrin, (Isle of Glass), which tends to back up the idea that it was seen as an island in the middle of the "Dark Ages".

Glastonbury Abbey was established as a Benedictine monastery, under Beorhtwald its first Saxon abbot, during the years 670 to 678 AD. Before then it had been known as a Celitc religious centre, the Tor was believed to hide an entrance to the Otherworld Kingdom of the Lord of the Wild Hunt, Gwynn ap Nud, a powerful other-worldly figure who was once banished by the Celtic St. Collen.

Pilgrims were said to have made their way to the Tor and followed the circuitous route to the summit as part of a sacred processional way for the priests and priestesses of the old Celtic and Pagan religions. At the time of the abbey's construction a church made of wattle and daub stood on the same spot, which local legends claimed had been dedicated by Jesus in honour of his mother Mary.

Glastonbury was already heavily associated with early Christianity. Joseph of Arimathea was said to have brought not only the Holy Grail, in which he had caught drops of Christ's blood as he lay on the cross, but to also have been responsible for a sacred tree. Legend has it that as he set foot on Wearyall Hill just below the Tor, in his exhausted state, he thrust his staff into the ground and then rested. By morning, his staff had taken root, turnint into a strange oriental thorn bush which is now known as the Glastonbury Thorn.

When William of Malmsbury, a noted historian, who is still respected for his attempts to accurately report the goings on of his life time, was a guest at the abbey during the 1130s he was commissioned to write a history of the saints associated with the abbey. He failed to produce that work but produced his De Antiquitate Glastoniensis Ecclesiae, instead. By Malmesbury's time, the story of the origins of the Old Church had been completely lost to history.

Legend, though, was able to supply the missing information, attributing its construction to two early missionaries sent from Rome. Bede wrote that "in 156 Marcus Antonius Verus, 14th after Augustus, became co-emperor with his brother Aurelius Commodus. During their reign, when Eluetherius was Pope, a British King named Lucius wrote and asked to become a Christian. This wish was granted and the Britons held the Faith which they received in all its purity and fullness until the time of the Emperor Diocletian". Unfortunately for Bede, as well as Malmsbury and modern readers, none of the dates add up.

The association of Glastonbury with Avalon and the Arthurian legends came about in a curious way. Enterprising monks at Glastonbury Abbey in 1190 claimed to have discovered the grave and bones of King Arthur and his Queen. The discovery of the burial occurred when the new abbot of Glastonbury, Henry de Sully, commissioned a search of the abbey grounds shortly after the reign of Henry II. At a depth of five metres (16 feet) the monks discovered a massive treetrunk coffin and a leaden cross bearing the inscription: Hic jacet sepultus inclitus rex Arthurus in insula Avalonia (Here lies renowned King Arthur in the island of Avalon).

Accounts of the exact inscription vary, with five different versions existing. The earliest is by Gerald of Wales in the Liber de Principis Instructione written around 1193. He says he says he saw the cross and it read: "Here lies buried the famous King Arthur with Guinevere his second wife in the isle of Avalon".
Giraldus refers to two bodies being inside the coffin, identified as Arthur and his queen and the bones of the male body were described as being gigantic. The account of the burial by the chronicle of Margam Abbey however, says three bodies were found, the third being identified as that of Mordred.
​
In 1278, the remains were reburied with great ceremony, attended by King Edward I and his queen, before the High Altar at Glastonbury Abbey, where they were the focus of pilgrimages until the Reformation. Today, a plaque marks the spot at Glastonbury. A lead cross, last seen by William Camden in the 18th century, used to be displayed in the abbey. It read: "Here lies buried the renowned King Arthur in the Isle of Avalon". The burial discovery ensured that in later romances, histories based on them and in the popular imagination, Glastonbury became increasingly identified with Avalon, an identification that continues strongly today.

How Glastonbury came to be associated with King Arthur remains an argument historians have debated for centuries since. Was the burial simply a way for the monks to raise funds to rebuild their abbey after it almost burnt to the ground in 1184 or did they truly discover an ancient British burial site? We cannot ever know the answer as the Dissolution of the Monasteries, begun in the 1500s by King Henry VIII, raised to the ground what had once been the greatest monastic foundation and church in all of Britain, second only in wealth and size to Westminster. 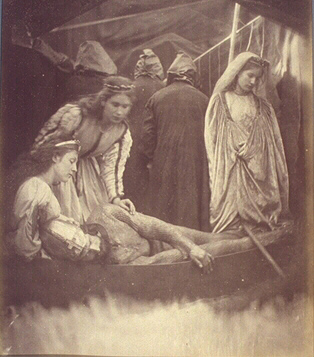 Julia Margaret Cameron: King Arthur wounded lying in a barge. Illustrations to Tennyson's Idylls of the King published in London by Henry S King 1875.
"But now farewell. I am going a long way
With these thou seest—if indeed I go
(For all my mind is clouded with a doubt)--
To the island-valley of Avilion;
Where falls not hail, or rain, or any snow,
Nor ever wind blows loudly; but it lies
Deep-meadowed, happy, fair with orchard lawns
And bowery hollows crowned with summer sea,
Where I will heal me of my grievous wound."

The Passing of Arthur, Idylls of the King by Alfred, Lord Tennyson 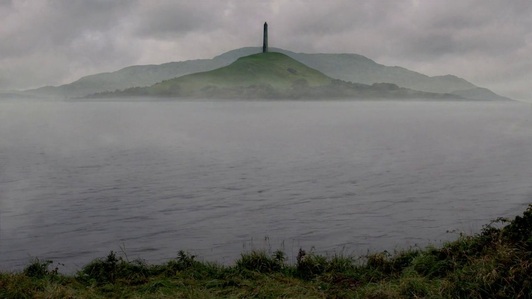 The BBC's Lake of Avalon with the Sidhe's island home rising from the waters.
In the BBC's Merlin, Avalon refers to a number of things.

Avalon is a lake in Camelot, while the Isle of the Blessed is a lake island near the Great Seas of Meredor.

Most noticeably it is the lake to which Merlin consigns the body of both his love Freya and his King after the Battle of Camlann.

It is also the final resting place of both Sir Lancelot and Guinevere's brother Sir Elyan.

The Lake is also home to the Sidhe, the immortal race of winged blue creatures who Merlin battles with for Arthur's soul in The Gates of Avalon.

The Lake is the only other gateway to the land of the dead other than the Pool of Nemhain and it is also the final home of Arthur's great sword Excalibur.

Once she became the Lady of the Lake, Freya kept Excalibur in her keeping after Merlin was told by the great dragon to remove its power from the court of King Uther as if it fell into the wrong hands, its magic could be a force for great evil.

Merlin took Excalibur to the Lake of Avalon and entrusted its keeping to Freya. She, in turn, returned it to him at the time of Arthur's crisis of confidence and enabled him to sheathe it into the stone from which the King was encouraged to draw it and proclaim himself worthy of the throne of Camelot, then occupied by his half-sister Morgana's forces.

Following Arthur's death, Merlin once again returns Excalibur to the Lady of the Lake. 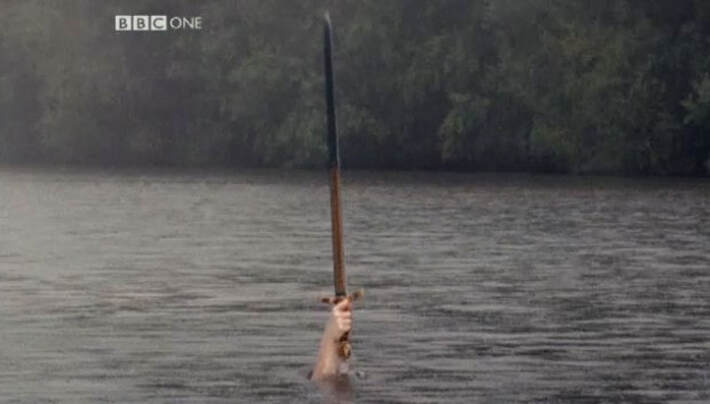